Children & Company Cooperative Preschool believes that Black lives matter. As a school and as a community, we join the call for action to end systemic racism and violence against Black, Indigenous and People of Color.

We believe that preschool is not too early to start learning about race, equity, and fairness. Our school commits to teaching our children to acknowledge, honor, and celebrate our differences and to speak up for what is right. We welcome all of our members to be part of the conversation so we can help each other and our school to continue to improve and grow. Our teachers are actively working on greater diversification in our classroom.

We believe that by raising our children to be anti-racist today, they will grow into adults who will contribute to a more equitable tomorrow.

Each month our school newsletter features a family within our community.  That family shares some of the things that make them unique and often they even share a family-favorite recipe, books and stories they love, or even a wonderful playlist! 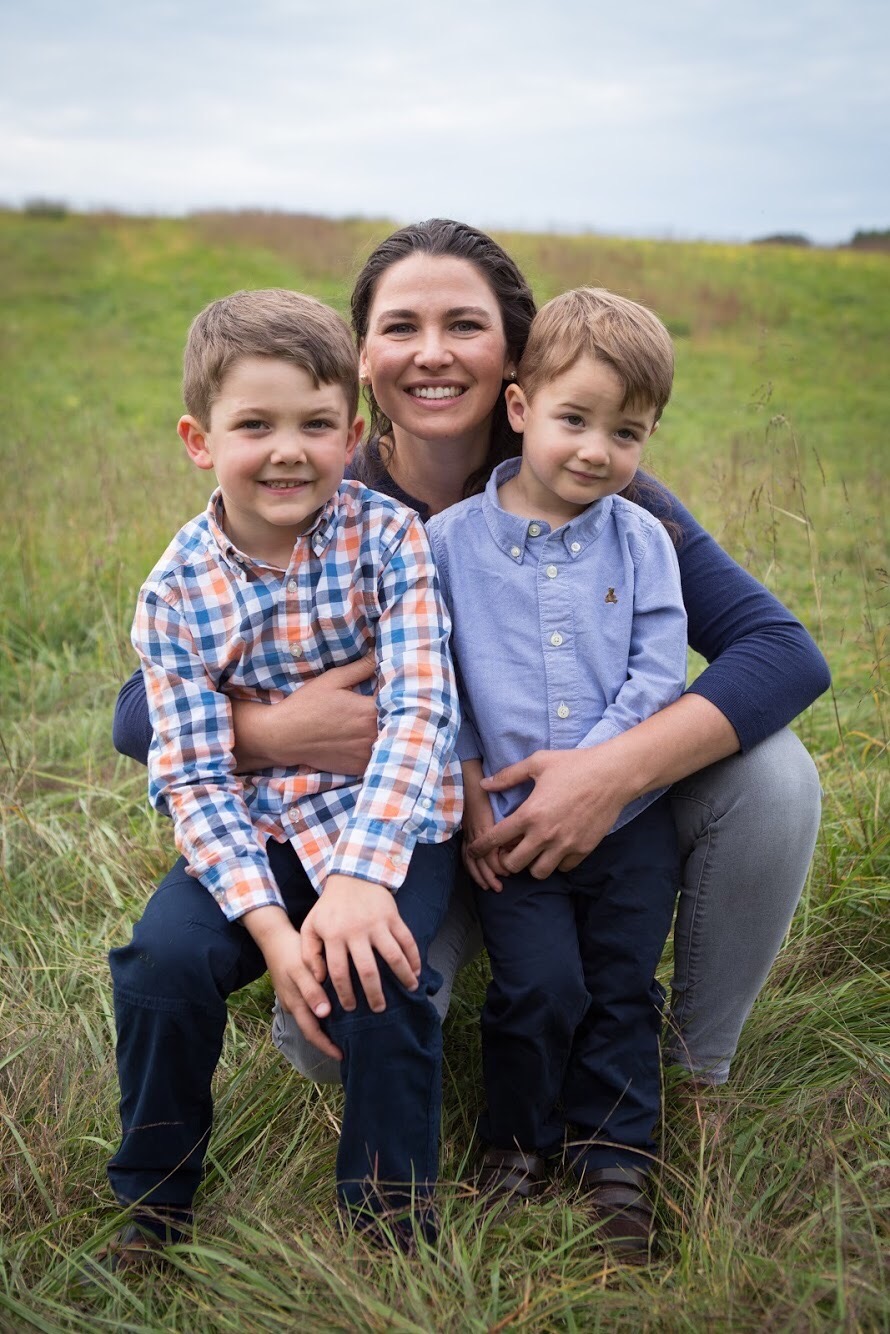 Hello everyone. I’m Jeanie Prescott, mom to Cameron in the 4’s class and Connor, who will be in the 3’s class next year. We love spending time outside digging in the dirt, hiking, and exploring. I wanted to share a bit about Greek Easter with you all, which will be celebrated May 2nd this year. While we are not practicing Orthodox Christians, Greek Easter is something that I grew up celebrating, as my dad was born in Athens, Greece. Orthodox Easter is celebrated on a different day than Easter in the Western churches due to following a different church calendar. Every 4 years they line up and are celebrated on the same day.

Leading up to Easter there is a 40 day Lenten fast, so food features prominently in the Easter celebrations. Traditionally, lamb roasted on an open fire is the centerpiece of the dinner, along with sweet Easter bread called Tsoureki (usually braided), cookies called koulourakia (my personal favorites), and lots of delicious sides, including the red hardboiled eggs that begin the feast. Eggs are dyed red to symbolize the blood of Christ, the resurrection and new life. There is a game Tsougrisma we play with the eggs, to determine who will have the luck for the year, and it might be something fun for you all to try as well.

A lesson on how to play Tsougrisma:
1. Each player selects a red egg and finds an opponent.
2. One person says, “Christos Anesti” (Christ has risen) and the other replies, “Alithos Anesti” (Indeed He has risen).
3. The person who said “Christos Anesti” taps the end of his or her egg lightly against the end of the opponent’s egg. (The goal is to crack the opponent’s egg.)
4. When one end of the egg is cracked, the winner uses the same end to try and crack
the other end of the opponent’s egg.
5. The winner with the unbroken egg then challenges another person and so on around the Easter dinner table until one person remains with an unbroken egg.
6. The player who successfully cracks the eggs of the other players is declared the winner and will have good luck during the year. 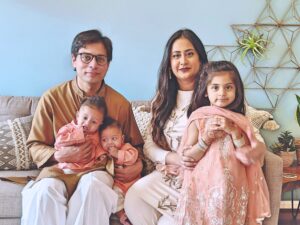 Hammad & I, Leena, are parents to Ayana in the 3's class and her one-year-old twin brothers Rayed & Reyan. We immigrated to the US in 2013 when a job opportunity for Hammad arose.

We are the third generation in our family to be immigrants. Our grandparents migrated from India to East Pakistan. Then when East Pakistan separated and became Bangladesh, my parents and Hammad's maternal family immigrated to the land we know as Pakistan today. I was born in the capital city of Islamabad but raised mostly in Karachi. Hammad was born in Karachi but raised in Lahore. He later moved to Australia for college. At home we speak Urdu and are raising our children as Muslim.

In a few days, we will begin fasting for the month of Ramadan. This is a very special time of year for a Muslim family. People who are able to, fast from sunrise to sunset and abstain from food and drink. During the day we mindfully practice kindness and generosity, give charity, pray and read the Quran, our Holy book. Before dawn we eat a pre-fast meal called suhur which is typically a big breakfast. Irrespective of which part of the world Muslims belong to, we all break our fast by eating a date at sunset followed by a grand iftar meal. For Pakistani families samosas (triangle savory filled pastries), pakoras (fritters) and chana chaat (spicy chickpea salad) accompanied by a red rosewater sherbet are special iftar treats.

After a month of fasting, we celebrate Eid-ul-Fitr when a new moon is sighted. Eid means feast or festival in Arabic. On Eid day, Muslims wear new clothes, congregate at mosques for a special prayer and greet each other ‘Eid Mubarak!’. Women and girls also paint henna tattoos on their hands. As a tradition, grownups give kids envelopes with cash inside. Back in Pakistan, we used to go house to house visiting friends and members of extended family on Eid day. Here we decorate our house and host friends for dinner on Eid day.

The picture above is from last year's Eid-ul-Fitr. 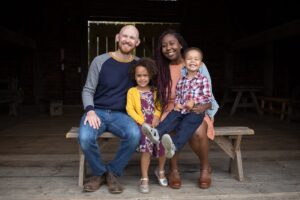 Hi Everyone! We are the Logan family. Our youngest, Easton, is in the 2s and Luna, our oldest is in the 4s. Mom, Val, grew up just down the road in Laurel (Scaggsville) and Dad, Dave, grew up right outside of Philly in the suburbs. We feel fortunate to be a part of this wonderful school community.

We have had so much fun learning about some of the families that attend our school, helping to initiate some of our brand new inclusive programs and watching our community grow and support one another. Our family considers itself to be mixed race. Mom is black and dad is white.  Cultural identity has been a unique experience for us in having children and making sure that they have pride surrounding all parts of themselves has been central to the way that we live and parent. Much of Dave’s family is from Canada and his older sister lives in Scotland (her husband is Scottish) with her family. Mom has made it a point to learn more about her ethnic background but, most of her family comes from North Carolina and she is very attached to the rich traditions of the southern Black experience.

As we enter into the month of February, we are so excited to Celebrate Black History Month. We make a big deal out of this month in the Logan household and have lots of fun talking about Black and African American Icons of the past and present! We typically do lots of craft, expand our library with a few new books and cook lots and lots of Southern food! This year, Luna has helped to construct our list of people to talk about.In creating the list, her only request was “Can we talk about Lizzo?”

We have had so much fun looking at the beautiful recipes that other families have submitted and cooking a few of them as well! In our very untraditional fashion, below is a Black History month playlist with some of our personal favorites. This playlist features a few Black artists of the past and present.  Val & Dave danced down the aisle to “Got to Give it up”, “If you want me to Stay” is Val’s favorite song of all times and “Juice” by Lizzo happens to be requested almost daily by both Luna & Easton for living room dance parties! We hope you have fun with this! 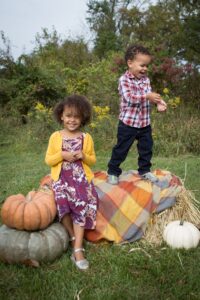